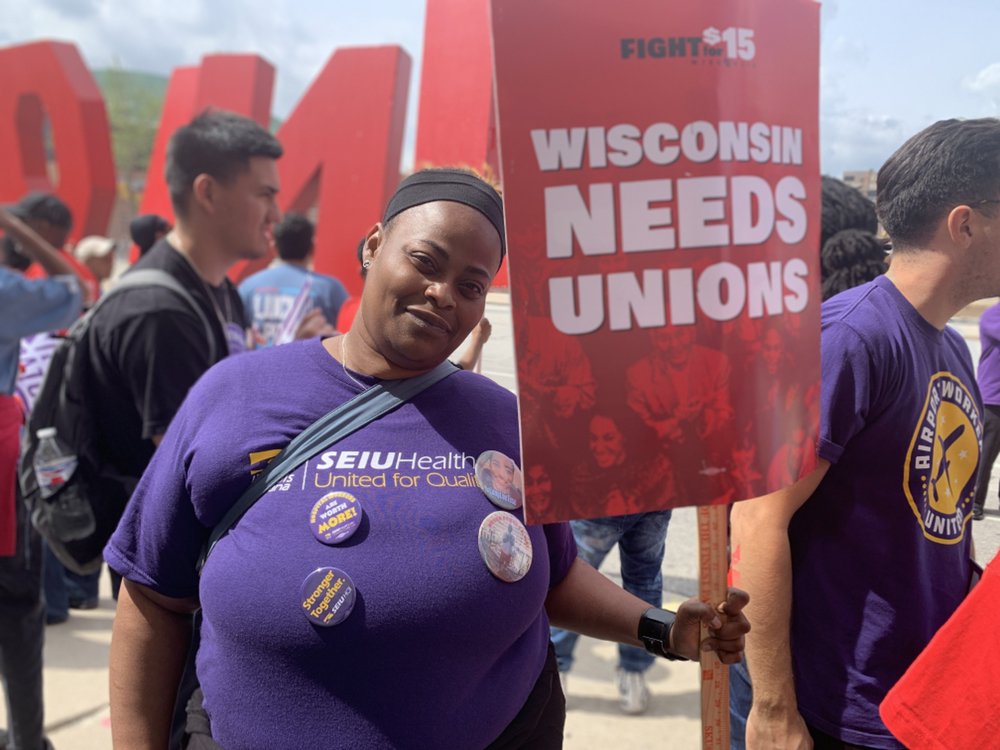 How We Make #UnionsForAll a Reality

On August 21 in Milwaukee, workers from around the country gathered in person (and online) to rally for Unions for All.

They joined SEIU President Mary Kay Henry as she announced the pillars of the Unions for All platform, laying out what our country’s next President must do to improve the lives of millions of families who are struggling to get by.

It’s not enough for candidates to just join us on the picket line. This election season, we demand that they fight alongside us to make our economy work for us by fighting for Unions for All.

After her speech, Mary Kay was joined by several workers onstage for a roundtable discussion. Although they came from different industries and have different skills, they all agreed that the current system is broken.

Some spoke about the struggle of not being able to support their children and families. Some talked about difficulties with healthcare and medical costs. From fast food workers to airport workers and adjunct professors, the message was the same — we need candidates to put Unions for All at the center of any economic policy.

“We need to have people in office who understand that struggle. To live day to day, paycheck to paycheck.”

The rich and powerful want us to think we have to pick and choose our priorities — healthcare versus immigration rights, #BlackLivesMatter vs raising the minimum wage, etc. — but this simply isn’t true.

Nationwide, the collective power of the Fight for $15 movement has already put billions of dollars in workers’ pockets. If we can guarantee every worker a real opportunity to form a union, we get closer to an economy and democracy that works for everyone.

Hundreds of workers joined SEIU president @MaryKayHenry today to kick off the #UnionsForAll campaign. Candidates must stand with workers to un-rig the rules and make it easier for anyone, no matter where they work, to join a union!

In fact, the politicians have already shown that they are hearing our message:

.@MaryKayHenry: Thanks for what you and SEIU are doing to strengthen and expand unions in America. Without a strong and vibrant union movement there would not be a middle class. Working together, we’re going to make it easier, not harder, for workers to join unions. #UnionsForAll https://t.co/KmuSjetrAA

.@MaryKayHenry is exactly right. Union workers built America. It’s time to stand up to corporations and put workers back at the heart of our economy. #UnionsForAll https://t.co/GsWnGYYeor

They know that it isn’t candidates who win elections — it’s working people.

Let’s come together and change this country once and for all, for us all. Make our movement even stronger and sign our petition to 2020 candidates today!