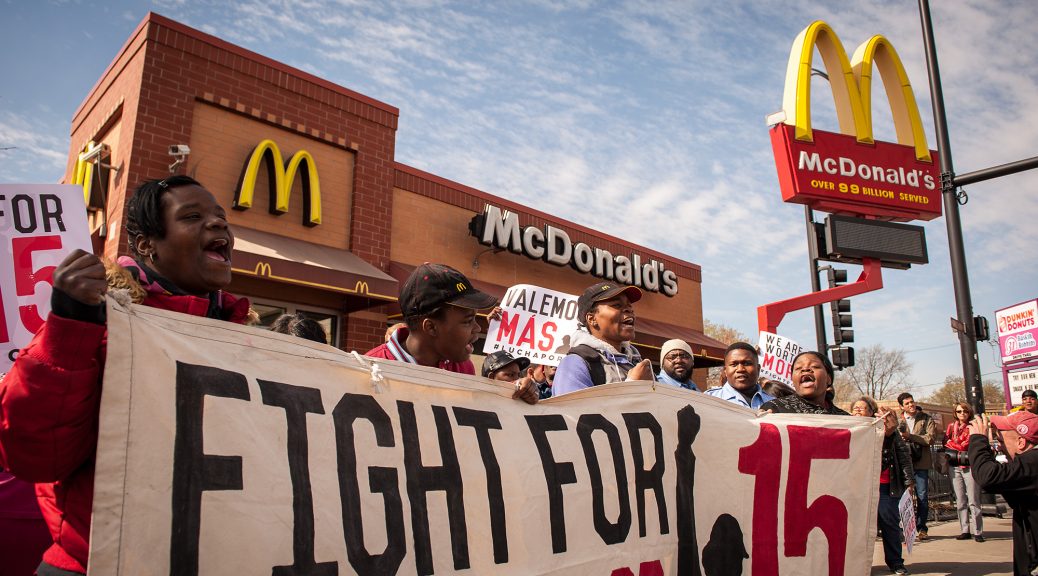 How Do I Win a Union?

Wondering how organizing a union works in the real world? The process might not be simple but it is possible. Read more and find out how you can start organizing!

Organizing is the process by which workers come together, take collective action, build solidarity and recognize their own power. The result of this process can often be winning material changes at work, fixing problems, and building a voice on the job through the creation of a union. But how does organizing a union work in the real world?

The truth is that if it were easy, all workers would have a union and a good job, but the process is neither intuitive nor simple. Most jobs are structured in a way so that workers are convinced they give away their autonomy at the door, that the boss holds all the cards, and that either they can get with the boss’s plan or hit the bricks. Overcoming the years of cultural indoctrination is done most simply by standing with your coworkers, never failing to have each others’ backs, and proving time and again that when you stick together you can win against the boss’s threats and efforts to divide you.

Here are the broad strokes to organizing in a practical way.

Having a one-on-one conversation

Winning a union is entirely dependent on building genuine relationships with your coworkers, knowing their concerns at work, assessing where they stand on organizing with you and being ready for whatever your boss will throw at you and your coworkers (and odds are it will be a lot).

The very first steps to organizing your coworkers is getting to know how they feel about the issues on the job, open questions like these can help you get to know about their experiences and give you a basis to relate on workplace issues

Asking these questions and actively listening to their answers are the bedrock of basic organizing. The willingness to stand with one another and take collective action to solve shared problems are at the heart of what unions are.

Based on these conversations, make sure to take notes. It may seem odd, but there’s no organizing without organization. Keep a list of coworkers that you’ve spoken with and their main concerns, and anything that’s relevant to remember about their role, feelings, and position. Here’s an example template you can copy and work from. You should keep this list confidential, so your boss doesn’t find out. This list will help identify leaders in your workplace, and it will be vital information as the process continues. Don’t be afraid to continue to add columns as you work towards goals like forming an organizing committee, getting letter signatures, or other tactics your group may want to take to improve your workplace. There’s no one way to build or maintain a list, but the biggest mistake is not updating it regularly.

An final important note about when and where you are protected to talk about workplace issues, unions, and more. Just be advised, that you are protected to talk about workplace issues like wages and organizing while off the clock at any time, however, you are not protected while on the clock and on company property. Your employer can still discipline you for doing this sort of thing on the job, legally, so keep this in mind when setting up longer one-one-ones beyond normal day to day chatting.

Mapping your workplace is the process of determining which of your coworkers are interested in organizing with you and which coworkers may need follow-up conversations or might even be antagonistic toward organizing a union. On your list, try and have a basic organizing conversion with each of your coworkers on their level of openness or enthusiasm toward organizing around workplace issues. A simple 1 to 5 scale is helpful in keeping track of their willingness to participate. 1s are generally leaders who are with you. They have “followers” and would bring more people with them into the organizing effort. Many times these are experienced workers who people turn to or who organize your coworkers outside of work around social or community events. 2s are people who support the union and are willing to help but who aren’t leaders. 3s are generally undecided. 4s are leaning against the union, and would be considered no’s. 5s are folks who would actively organize against your efforts, inform on you to the boss, or who would seek to preserve the status quo at all costs.

Keep updating your list of coworkers with how they feel about organizing and who might be less open. Keep notes about their issues and what concerns they have. As you update your list, you can start determining leaders in your workplace and identify who may be a good member of your organizing committee.

Winning a union is entirely dependent on knowing where you and all of your coworkers stand on the union, and making sure that everyone is informed and ready to support one another.

Organize Around an Issue

As you’re talking to more and more of your coworkers and hearing their experiences, you’ll start to hear trends and patterns in the issues expressed. Grievances alone, however, aren’t enough for a union drive, and they can pile up together and seem like too much to tackle. Instead of taking on everything at once, you have to find an issue that strikes a chord with the majority of your coworkers to begin organizing around.

Your organizing committee should be representative of your workplace in demographics, shifts, and departments. Ideally, it will be made of leaders, as we discussed earlier. Identifying leaders can be a slow painstaking process, especially if you are looking for leaders in groups that you yourself are not a member of, however, it’s important to recruit workers who are respected and can bring along their constituencies, because the key to winning change through collective action is having a supermajority of support. An organizing committee of 30 in a workplace of 300 workers would be a fair size.

By having an organizing conversation with these leaders around the issue you’ve identified as winnable, agitational, and shared by a majority of your coworkers you can encourage these leaders to participate in the process of forming and taking part in the work of the organizing committee. The process of organizing is inherently democratic, so once the committee is assembled, meet together to form the rules you will operate under and the ways in which you will hold yourselves accountable to reaching out to your remaining coworkers and organizing them to take action.

The OC will be responsible for the strategy and tactics of the campaign moving ahead as well as the heart of the organizing work. Each member will have a responsibility to bring along the coworkers assigned to them, updating the list with notes and assessments, and implementing the tactics as decided.

Now you are set to execute and win campaigns as an organizing committee. You can decide on tactics like a letter or march on the boss, you can work to form your own union, and continue the process of talking to, assessing, and building solidarity with your coworkers by taking collective action to fix the issues in your workplace. Just know that, it is neither a simple or easy process. The system is rigged against workers, both in winning the protections of a union, and in exercising their rights together. Un-rigging the system must be every organizer’s long term goal, but the strongest defense you have day to day is the solidarity and support of your coworkers.

Stronger together, not one step back!