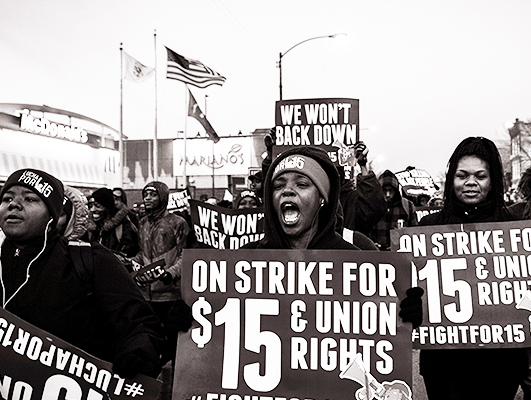 Just days after McDonald’s CEO Steve Easterbrook was fired for an inappropriate relationship, the Fight for $15 — in partnership with the ACLU and Time’s Up Legal Defense Fund — filed a new class action lawsuit against McDonald’s for a “culture of sexual harassment.”

That’s why hundreds of Fight for $15 workers went on strike in the streets of Detroit yesterday, braving record cold temperatures to demand unions for all, $15/hour, and an end to sexual harassment.

“Corporate greed in our country is a disease. And you are going to stop it!” -Rep. @RashidaTlaib rallied with @McDonalds workers on strike this morning in Detroit.

Last year, she took arrest with us. United we can win the #FightFor15 and #UnionsForAll. pic.twitter.com/mrI1hjtARs

Later that day, former McDonald’s employee Janna Ries spoke out about the sexual harassment she experienced at a Michigan franchise — and why it’s time for change:

In an exclusive TV interview, a former McDonald’s employee tells CBS News why she is suing the fast food giant over sexual harassment. @AnnaWerner spoke to Jenna Ries who says she repeatedly asked for help from a supervisor, but was ignored. pic.twitter.com/zRsHApVITp

Our movement is winning. And our momentum went beyond Detroit yesterday.

Workers all across the world joined together for a #FastFoodGlobal Day of Action — calling out exploitation from McDonald’s and the fast food industry and demanding higher wages and union rights.

It was a day of global solidarity, with hundreds of workers coming together across the world for better pay, an end to sexual harassment, and more protections on the job. When solidarity crosses borders, our movement becomes unstoppable.

Check out and share this video recapping our momentous day.