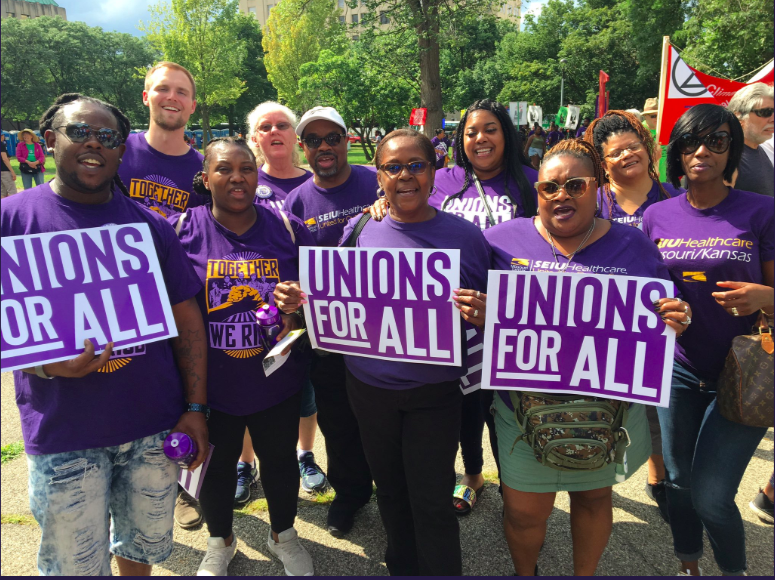 Today in Milwaukee, hundreds of workers joined SEIU International President Mary Kay Henry to announce the Unions for All platform, including four key policy pillars that 2020 presidential candidates must adopt to show they stand with workers.

Hundreds of workers joined SEIU president @MaryKayHenry today to kick off the #UnionsForAll campaign. Candidates must stand with workers to un-rig the rules and make it easier for anyone, no matter where they work, to join a union!

As Helaine Olen wrote in The Washington Post, “Don’t think you are going to get [SEIU’s] support by simply marching with workers on the “Fight for 15” picket lines.”

Allies and presidential candidates alike shared their praise of the new Unions for All agenda:

.@MaryKayHenry: Thanks for what you and SEIU are doing to strengthen and expand unions in America. Without a strong and vibrant union movement there would not be a middle class. Working together, we’re going to make it easier, not harder, for workers to join unions. #UnionsForAll https://t.co/KmuSjetrAA

.@MaryKayHenry is exactly right. Union workers built America. It’s time to stand up to corporations and put workers back at the heart of our economy. #UnionsForAll https://t.co/GsWnGYYeor

We support @MaryKayHenry and @SEIU‘s call for #UnionsForAll. When working people have more power, our movement will have the strength to win. #PoorPeoplesCampaign https://t.co/zAY4EQeEOu

At @SierraClub , we support @MaryKayHenry and @SEIU‘s call for #UnionsForAll. When working people have more power, better wages, and family-sustaining jobs, our movement will have the strength to win on the issues that matter to us all. https://t.co/KqGnYhhjVN

We’re being exploited, and we’re sick of it. That’s why we’re fighting for $15 and #UnionsForAll. Join the movement: https://t.co/69Re3F89Bn #FightFor15 pic.twitter.com/ebuSvveOU5

.@SEIU and my friend @MaryKayHenry are building a movement to support hardworking care and service workers – many of whom are women.

These workers have historically been denied a seat at the economic decision-making table. We need #UnionsForAll.https://t.co/GrK7NXU1rr

Join them in demanding Unions for All. Sign the petition now